I’m not a published author. My aim is to write books one day, but for now, my focus is mainly to read them. (This reminds me of Schopenhauer’s statement that “buying books would be a good thing if one could also buy the time to read them”.) However, I have learnt to a small degree how to deal with critics.

Maybe it has to do with the subject matter I deal with – sensitive ethical topics that happen to be my research focus like infanticide, suicide, and so on – but I’ve learnt to focus only on necessary commentary. That is commentary that actually adds to the discussion, by pointing out flaws in my argument and view.

I’m not given to emotion, in general, so emotional tirades against me or my character do not phase me. They are merely annoying, since I would rather read someone who can actually contribute to a topic (this is why I moderate all comments on this blog, even though I approve most of them).  So I am lucky: I’m not an emotional person and I have been writing about some of the most sensitive topics to most people. This means criticism and overviews fall into open categories of “boring”, “inspiring”, “genuinely curious but apprehensive”, “eloquently critical”, “insulting”, or “insultingly critical” (these are the worst because the commenter has a good point but embeds it in invective).

Someone who does not have my benefits of being mostly unemotional and dealing already with difficult subject matter is a lady called Jacqueline Howett. You may already know her, since she became an Internet sensation. This is due to her response to a book-review of her work with the unfortunate title of The Greek Seaman, at a small, but friendly, blog. There are plenty of other blogs indicating better than I what happened. In brief: Ms Howett did not like the review Mr B. Al wrote. She complained that he was unfair, that he did not review the correct copy, and that, judging from the (very small) number of reviews at the time of her writing, the book deserved a better score (Al gave it 2 stars). 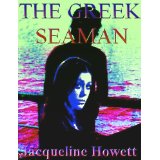 I know. The cover makes me want to buy it, too.

Mr B. Al has retained his professionalism, in both the content of his own responses and the quantity. He replied twice but has now left it to Ms Howett and her hunters to continue. I think that Ms Howett has abandoned the thread, though. Her final words are also, um, interesting (and which, for some, mark the epitaph because of the death of her writing career): “Fuck off!”

She demanded that Mr B. Al respond to her emails, demanded that he read the other reviews, but worst of all she didn’t respond to Mr Al’s major criticism: her spelling and grammar. When he displayed some sentences, in his response, Ms Howett gave it the once over and didn’t find a problem with them. Er, right. Here’s a sentence Ms Howett claims is fine.

She carried her stocky build carefully back down the stairs.

Don and Katy watched hypnotically Gino place more coffees out at another table with supreme balance.

These are terrible sentences. But Ms Howett, as if channelling the gods of irony, responded to criticisms of her spelling and grammar with diatribes like this, on the blogpost:

Maybe its just my style and being English is what you don’t get.

This is not only discusting and unprofessional on your part, but you really don’t fool me AL.

Your the target not me!

You are a big rat and a snake with poisenous venom. Lots of luck to authors who come here and slip in that!

We don’t expect to be Shakespeares on comment-threads, but if the major reason your work received a poor review was bad grammar and spelling, you do nothing for your case by charging, heart-first into a thread about it. As I’ve indicated elsewhere, in the first part of this series, anger makes us idiots.

But there is plenty to read about Ms Howett and I think she has been targeted enough for making an arse of herself online. Perhaps she had a bad day, she was angry, and so on. It doesn’t matter. What I’m more interested in is her initial response, which ended with this sentence: ‘Sorry it wasn’t your cup of tea, but I think I will stick to my five star and four star reviews thanks.’

This to me is the worst part, aside from her silliness and anger driven comments later. The fact is: She has publicly-stated she is only going to look at good reviews. There are number of reasons this is bad: Firstly, this is an active, conscious version of the confirmation bias – where we segregate only the evidence and points that support our views, instead of looking at counter-evidence or arguments. Writers on critical thinking constantly point this out as an unconscious mechanism which hinders critical engagement in many areas. The fact, for Ms Howett, this is not unconscious but a public statement of listening only to sycophants.

Which leads to the second point: Do you want to be safe or do you want to be good? Do you want to be in a cocoon of solipsistic yes-men or in the world contending with reality? These are not mutually exclusive, but, in many important cases, they are. We cannot find a cure for cancer based on choosing what evidence we want; we must evaluate all of it (one of the problems with prayer therapy and faith healing). This means facing reality.

This is no different for anyone else, including (and perhaps especially?) writers. I could write to a few friends and argue with them about the ethical topics I care about, perhaps some friends who I know like me too much to argue back (I like to tell myself it’s because I’m a good debater but it’s mainly because I bore them. I also don’t have any friends who aren’t themselves worried about such issues, usually from different angles. Which makes them interesting and therefore my friends.) But would I make any impact on the world or on anyone other than these or even on myself? Would I actually have solid views about the world? If my views aren’t tested on the battleground of ideas, in the world where it matters, what use are they except self-indulgent whisperings to myself?

As writers, this is quite obviously a hazard of the job. For Ms Howett to say she will stick to four or five star-reviews is to undermine an important aspect of writing: improvement. One reason I maintain pessimism as a necessary factor in ethical engagements is precisely along these lines: If everything is wonderful and great and filled with rainbow-unicorn love, why do we have to work to improve anything? If I am such a great-writer that I can score four or five-stars on Amazon, I don’t have to: check spelling and grammar, make sure I publish a proper version of my book instead of meeting deadlines, work on my public image, hire an editor, etc.

This idea that everything is fine, the world is painted in a thousand colours of kitten-love, is on display here. Positive-thinking, positive-psychology, and all that other nonsense ties into this. This is why her statement bothers me. I would call it a symptom of the cancer of optimism, but you are welcome to simply refer back to my main point: It is a bad idea, from her being a writer to her being just an ordinary person, to focus only on the things that make her happy instead of the things that will actually make her (and her art) improve.

9 thoughts on “Bad Comments Round #2: Jacqueline Howett, Responding to Criticisms, and the (Usual) Dangers of Positive Thinking”

This work is licensed under a Creative Commons Attribution-Share Alike 2.5 South Africa License.

Various subjects of scorn or praise

Number of dolphins you have killed by reading